Create programming scripts with this powerful tool that supports more than 130 languages and allows users to work concurrently on as many as six groups of projects. Programming scripts can come in a wide variety of containers, with similarly varied options for the actual coding language employed. Fortunately, this abundance of options does not mean that developers must necessarily employ a myriad of programs to write their code, as detailed tools such as CudaText allow software engineers to write down new code sequences quickly.


Features
Create new snippets
The program's strong point is its ability to work with multiple snippet projects of any kind at the same time, in split views. Another noteworthy feature of the application is its support for syntax highlighting; all in all, around 130 lexers are supported, including commonly employed languages such as Python, C++, Java, and Ruby. The application is very forthcoming and newcomers will find it extremely easy to employ. It features the standard, clean text editing environment and all the lines are automatically numbered. A 'go-to' function allows one to jump to a certain entry quickly and case conversions can be performed automatically in the “Edit” menu.

Increase productivity by working on as many as six concurrent groups
Working with multiple documents at the same time can be performed using various layouts. For example, one can have a 6-item grid, as well as a three frames horizontal display. What's more, each group can feature more than one file, thus significantly increasing the options when multitasking several projects. Bookmarks are supported and one can also adjust font settings; more-so, indents can be added and line comments can also be inserted. Once finished, users can save their work as code snippets specific to the language employed, ready to be compiled and built with any compatible external program.

An overall practical code editor that can be especially useful when multitasking
To conclude, CudaText is a valuable tool for developers regularly working with multiple snippets at the same time. The split view function can be a real asset in such situations and syntax highlighting is provided for around 130 programming languages, including most common options. 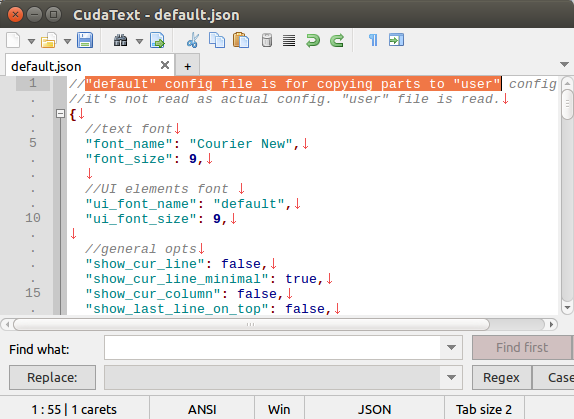