UltraDefrag is a powerful disk defragmenter for Windows. It can quickly boost performance of your computer and is easy to use. Also it can defragment your disks automatically so you won't need to take care about that yourself.


Features
UltraDefrag has the following features:
UltraDefrag can defragment both FAT and NTFS disks with just a couple of restrictions:
However, the program tries to optimize those files placing their fragments close to each other behind the first one. UltraDefrag can be used on Windows XP/Vista/7/8/10 as well as Windows Server 2003/2008/2012/2016. Elder versions of the program (prior to v7) can be used on Windows NT 4.0 and Windows 2000 as well, with some limitations. Additionally UltraDefrag for Linux exists which is an independent port of the program based on NTFS-3G capabilities. 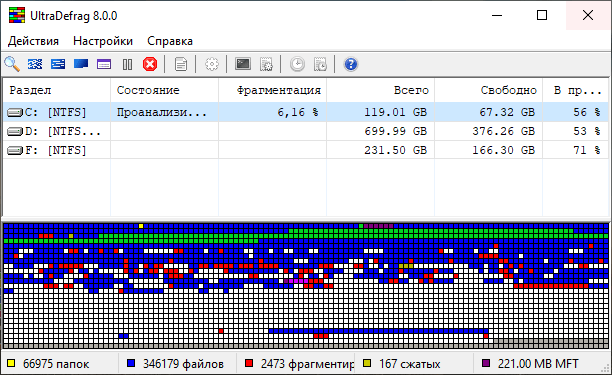 Error in the link of the portable version.

Thank you for notification. I'll update the links today…

All links have been updated.
Only registered users are allowed to comment