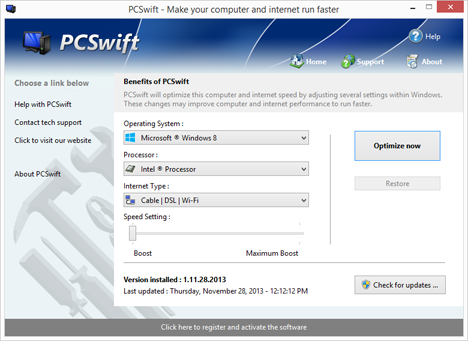 PCSwift sets the standard for PC and internet optimization software. A combination of our two products PCMedik and Throttle.

Over time as you install new and updated software, you get the impression your computer is slower due to these applications being more demanding of faster hardware. PCSwift makes your computer faster by making several changes to Windows settings; for instance it turns off several animations that degrade performance, instructs the CPU how to prioritize background tasks, how files are loaded and written to the hard drive, changes to the way memory is used when programs use the memory swap file and the overall speed of your internet connection and latency.

PCSwift also improves the speed of your internet connection; these system changes work with all internet connections such as Cable, DSL, U-Verse, Fios and dial-up. If you notice during multiplayer gaming that you are getting long pings and lag, PCSwift can help improve the speed of your connection. PCSwift makes several Windows registry changes to improve how networking packets are transmitted and received, we increase the buffer sizes which allows data to be transmitted and processed faster on your computer, allowing games, web browsing and downloading files to work much faster.