The amazing video converter is not only an easy-to-use movie conversion tool but also a powerful audio converter which can convert between audio files like MP3, AAC, AC3, WAV, WMA, etc. Moreover, it can extract audio from video and music video by only a few clicks. Bigasoft Total Video Converter supports playback on a great variety of digital devices including iPod, iPhone, BlackBerry, Apple TV, Zune, PSP, PS3, Pocket PC, Creative Zen, Xbox, Archos and so on. Moreover, the versatile video conversion tool can adjust video effects like video cut, trim, crop, merge, clip and so on to meet all your different needs.

Rip music from your favorite movie or music video to listen whenever you like.

Take video snapshot to capture a certain scene in the video as you like.

Convert multiple files at a time to save your time. Moreover, it can turn into a great video joiner to merge them into a complete one.

By super easy and intuitive user interface, only 3 steps, and you can easily enjoy favorite movie wherever you are. 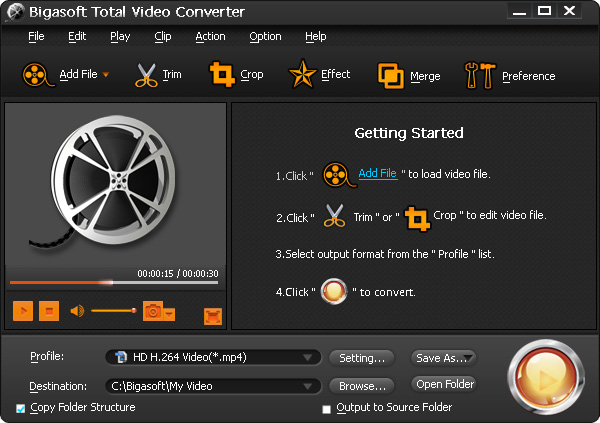