PrimoCache is a supplementary software caching scheme that cooperates with physical memory, solid-state drives (SSDs) and flash drives to provide data caching for local physical disks. It transparently stores disk data into fast cache devices such as physical memory, so that future read requests for those data will be served directly from the cache and be faster. Thus access time will be reduced, showing a great improvement in overall system performance.


What Can You Do With It?
PrimoCache In Detail
PrimoCache implements a two-level caching architecture consisting of level-1 cache and level-2 cache. Level-1 cache, also called primary cache, is composed of physical memory. Level-2 cache is a secondary cache which typically resides on a solid-state drive, a flash drive or other fast persistent storage device. Obviously level-1 cache runs much faster than level-2 cache, although it is usually much smaller. PrimoCache allows a single level cache configuration using either level-1 cache or level-2 cache, as well as a two-level cache configuration using both levels of cache.Unlike level-1 cache which cannot keep cache contents on reboot, level-2 cache is able to retain its cache contents across computer reboots because of the persistent nature of storage devices. This avoids fetching often-accessed data again from slow disks each time computer boots up. Thus level-2 cache will remarkably reduce boot-up time and speed up applications for those computers which install mechanical hard disks.PrimoCache also supports write-deferred caching mode, which executes write requests on the cache first and synchronizes data from the cache to the disk after custom delays. Therefore write requests can be responded and completed very fast, greatly improving the disk write performance.In addition, PrimoCache implements the Unified Invisible Memory Management Interface (UIMMI), which can use Invisible Memory as level-1 cache. Invisible Memory, also known as Unmanaged Memory, usually exists on 32-bit desktop Windows where 4GB or more physical memory is installed. This feature helps to overcome the Windows limits on amount of system memory and fully utilize all installed physical memory.PrimoCache fulfills an intelligent cache replacement algorithm which optimally determines cache blocks needed to be discarded to make room for new data when cache space is full. This cache algorithm combines two normal algorithms which are Least Frequently Used (LFU) and Least Recently Used (LRU), and provides a better cache hit ratio. It is self-tuning and requires no user-specified parameters.PrimoCache allows multiple cache strategies and flexible configurations. It is implemented in Windows kernel level and is transparent to other applications. Therefore no application or system changes are required for this caching solution. With PrimoCache, you can easily setup caches for local disks and speed up your computers.
Features
Why PrimoCache?
Why do we need PrimoCache since Windows has already implemented a file-system level cache?
How to use Bundle Trial Reset 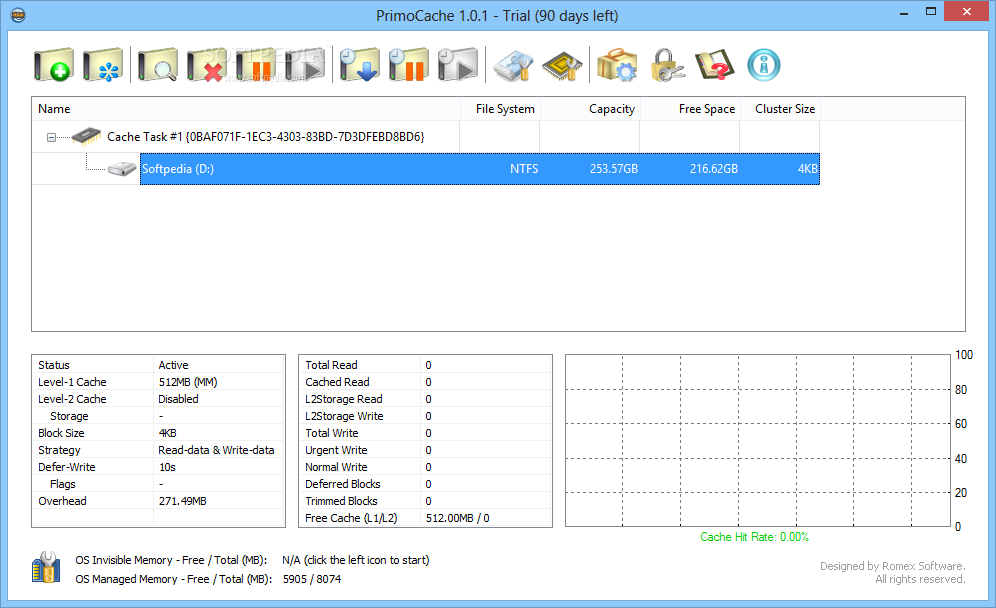 Download Only Executable files (GUI & CLI) with a «cosmetic» status is 'Registered':
MultiFileMirror.com

Added fix for Trial Reset. Try once add to registry PossibleFix.reg immediately before applying TrialReset. Thanks to Levvon

Well, it doesn´t matter because trial reset doesn't work for this version.

the crack doesn't even on 3.0.2 kernel component is not running… even after reboot 64bit system win7

Yes, the crack doesn't work. People who are working doing medicines for this program said that for now is impossible to do any crack. If they finally get any medicine for this version or newer, we will upload it. Thanks for the advise and sorry for the delay.

Can someone confirm if this is really working? guys??

What exactly are you asking for: if the medicine works or if this program works at all?

I'm asking if the medicine works?
cause I tested it add it to shutdown script, the days still counting down from 30days to 27 days…
It means the medicine is not working anymore with 3.0.8 Preview

1. Through (or you can try running the registry editor with and delete everything you need without problems) delete in the registry 3 branches according to the instructions. The only difference is that I had them not in ControlSet001, but in CurrentControlSet
2. Through PCHunter, delete the file in System32. To find: sort the files by size, mine was 647 bytes with the attribute «NO».
3. Start the "" (Replace them with the same file in the Trial Reset folder) with admin rights. Reboot system
4. Start PrimoCash and VUAL)) 60 days
5. Look after rebooting the file in System32. It should appear again in the size of 845 bytes and increase.

I'm so sorry but I don't follow what you said… can you make a video guide how to apple the fix batch file?
I run pchunter but its having an error about «Load error driver»
I run PowerRun, its running now what to do next?

what do I need to delete in system32?

You should delete the marker file, but in the new Trial Reset it looks for it automatically. Just start the batch file and reboot the system. I can not make a video, because I do not use this program. I have enough Diskeeper, which automatically writes to the free RAM memory cache of the most frequently used programs. Write about the result. Forward to hearing.

I updated the fixed batch file but still the same, I try to change date to test but it expires after restarting… I added the script in the gpedit shutdown script. its not working

Maybe you are making a mistake somewhere, because for many who used it everything works without problems… Now I will try to give a description of one more option.

By oval2003
I decided to experiment here with resetting the trial… I moved the «file label» to the RAM disk, and in its place I placed a «symbolic link» in System32, and since the contents of the RAM disk are deleted during the reboot, I received a guaranteed reboot deleting the «file tag» and guaranteed trial reset. With this approach, a reset occurs even if the time is transferred one year ahead, i.e. for a period longer than the trial… With this approach, there is no need to reset the trial in «safe mode»…

P.S. I abandoned the RAM disk, because sometimes I get when I download BSoD. Instead of a RAM disk, I bit off a part of the physical disk and created a small partition (12 meters) on which I threw this file mark. And in the bat-nickname which in the completion policy added the command to quickly format the disk…

I completely follow your guide but I think the one you are using is working and the one here is not working…
can you please upload the Bundle Trial Reset v3_PrimoCache 2.3.0–2.7.0 & Primo Ramdisk 5.7.0 that you use.

This is the medicine that is above. Need to apply it. I myself wrote earlier that I do not use this program.

I need help please when I add the script in the shutdown script the restarting takes time to load… I have to force restart the computer… why does it says x86 when loading when I use 64 bit?

Sorry for the confusion, what I'm trying to say is when I the trial resetter and set it as a shutdown script, the shutdown and restart of the computer takes a lot of time and it even stuck. Means I have to force reset the computer.

But If I dont use the script trial resetter the restart is fast!

Sorry, now I understand what is being said. I do not know what could be the problem. Do you use an antivirus program? It can check it every time the script is run and this can lead to slow system startup. In any case, if possible, I will contact the creator of the script and ask him. I will inform you about the result immediately. Have a nice day!