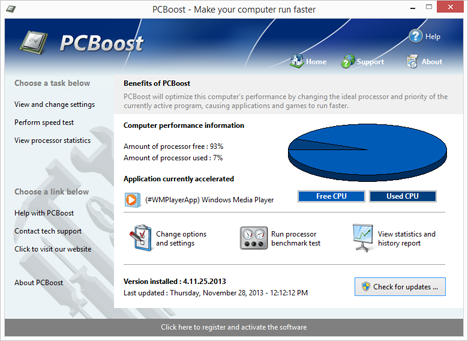 PC Boost — a program for automatic release of computer resources for running the application. The program will allow you to run applications such as computer games, software for video editing photos much faster than it would be without the use of PC Boost. The utility automatically takes over the task of allocating more processing power for specific applications, so that applications running faster. The program runs as a system service on Windows and automatically monitors and prioritize CPU for each running application. Latest version supports Windows 7. Many programs and games often use a minimal amount of CPU power which often leads to a simple processor.

PCBoost uses this by allocating more CPU power to the currently active programs and games. All this is done automatically without you. PCBoost does not harm the computer, while providing equivalent power that a computer having a more powerful processor.

PCBoost simple and very easy to use. A few clicks of changing settings and the application is ready for use. PCBoost runs automatically when Windows starts and manages the CPU / Processor according to the user's settings.


Some key features are